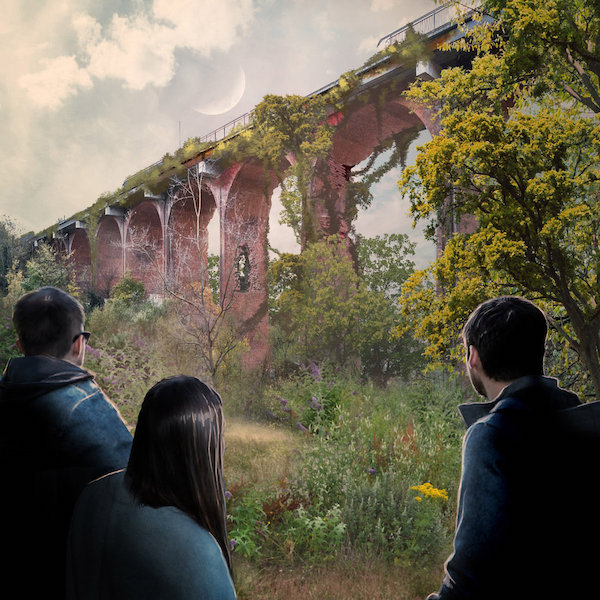 Previously, electropop outfit Twist Helix had surprised us with the dramatic and uplifting vocal melodies of ‘Little Buildings’. Consisting of Bea Garcia (vocals & keyboards), Michael Humble (bass) and James Walker (drums) the Newcastle-based band signed to Madrid-based record label Paul Back Music on the strength of earlier release, the power pop tones of ‘Pulse’. Their reputation as a live band has also been built up via an exhaustive tour schedule.

Now the trio return with ‘Ouseburn’, the title track from their forthcoming album. As with the likes of ‘Little Buildings’, Twist Helix manage to craft euphoric compositions from often dour lyrical material. In this case, some social commentary on the changing landscape of Newcastle, with the focus in particular on the area of Ouseburn (“The changing industry/burying memories of Swan Hunter”).

As a band, Twist Helix have long taken an interest in the decline of local music scenes and creative communities. That interest has been weaved into a dystopian vision in much of their visual elements, particularly in the artwork for recent releases which shows the band members observing a broken world. It’s perhaps not surprising that the trio have built up such a loyal following on the live circuit based on their knack for engaging melodic tunes. The band also embrace both electronic and traditional instrumentation to craft their sound. It’s something that the likes of Hot Pink Abuse pull off so well and illustrates, perhaps, that electronic music doesn’t have to be all fundamentalist about synths.

As with ‘Little Buildings’ before it, ‘Ouseburn’ demonstrates that Twist Helix continue to be a band to keep an eye on.

‘Ouseburn’ is out now on Paul Back Music.