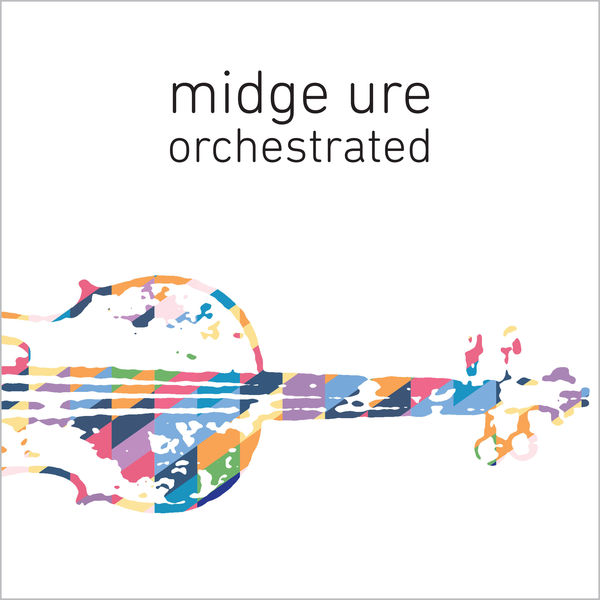 Musical success is seldom measured in time spans of more than a few years. Yet, by the time Midge Ure’s first solo single ‘If I Was’ went to No.1 in the UK Top 40 (way back in 1985), he had already lived a myriad of musical experiences and contributed to some notable collaborations (all within a ten-year professional career). Slik, Rich Kids, Thin Lizzy, Visage, Ultravox and, of course the most illustrious one-off group in musical history, Band Aid, were all buoyed by the guiding hand of his renowned musical navigation. All things considered Midge Ure is, without a doubt, a master of reinvention; traditional songcrafting always a mainstay. Hence of course why his long-awaited and much anticipated 2017 release, Orchestrated, may be a surprise to many. Yet it’s perhaps merely an extension to his current field of vision, one that we’ve come to expect from a musician with such a marked creative passion.

The last acoustic-based tour proved that it had taken Midge at least 25 years to find a set of musicians who could finally give the Ultravox songs that he’d been attacking solo for countless tours prior, the treatment and justice they deserved (no mean feat by any stretch). And it was a couple of young guys, aka India Electric Company, who pulled the task off admirably; with an obvious flair for traditional instrumentation, morphed with superb musicianship. Hats off to them, it worked. And solo acoustic is just one of the guises in which Midge has presented the music of Ultravox over the years. All things considered, and with Midge being the visionary he is, does the release of Orchestrated go that much against the grain? Absolutely not. And not only that, the music of Ultravox is already so perfectly constructed – in such a way – that it almost begs to be given an alter ego; that carefully articulated orchestral presentation. Absolutely.

Looking back, Ultravox have always showcased a virtuosity that has taken them on a gradual, yet decisive journey, and one which would extend some way beyond the archetypal pop formula. With distinct classical touches clearly evident throughout much of their electronically diverse catalogue, and perfectly balanced against a unique distribution of tone and colour, perhaps a purely orchestral-based outline was a natural progression for the existing works. In fact, consider the rich tapestries that feature in their compositions – instrumentals with cinematic impact and atmosphere – and it all slots into perfect peripheral vision. You only have to take an Ultravox song of choice to know the template was indeed already there.

While Midge didn’t quite pull off his fray into the world of Popstar to Operastar in 2011, no thanks to Katherine Jenkins, the choreographed arrangements for this latest incarnation of songs that feature on Orchestrated do attempt to guide things back towards the traditional and the organic, with such arrangements courtesy of renowned composer, pianist and master of soundtrack, Ty Unwin. Orchestrated, then, according to Midge: “took eighteen months to make, but a lifetime of work to achieve,” and features versions of Ultravox favourites set alongside classics from Midge Ure’s own solo back catalogue.

The overture, of sorts, to this whole piece then is ‘Hymn’, providing the perfect exposition with its vast ranges of sound, timbre, dynamics and instrumental colour. Instantly it’s clear – certainly with this particular track – that Ultravox has stood firm as a model for such vivid reimagining of the music. ‘Hymn”s pace and drama are perfect – it’s as majestic as you could possibly imagine… and more. Giving plenty of contrast, the low octave piano enhancement we hear is a fitting touch – you heard it in live synth format, and here it emerges as a natural figure. The introduction to ‘Dancing With Tears In My Eyes’ almost represents the most gentle, free-flowing stream. Purest of them all, and rippled with sadness, its naked piano most definitely weeping for memories that are gripped by loneliness; the understated lower register strings that bring the track to its close are emotively touching. It’s those subtle embellishments that really make a difference throughout.

It’s easy to imagine the grandiose backdrop of the Scottish isles – not least, those videos that accompanied much of the music back in the day – when listening to many of the featured tracks here. And naturally, both ‘Man Of Two Worlds’ with its atmospheric female backing vocal and gentle piano outro) and ‘Lament’, really are back on their homeland, creating a definite island and traditional type feel. And, with the latter, where the peat embers once glowed, there are flash floods of intricate detail, rising like native wildflowers, out from the remote and otherworldly expansive layering of strings.

‘Ordinary Man’ lends its moment. It’s deep, contemplative and affectionate, while ‘Death In The Afternoon’ has a ghostly ethereal choral preamble; and so much presence, you can almost see condensation from cold breath on the windowpane. There’s the crackle of static before the track kicks in; persistent rhythmic cellos underpinning, while lively violins and responsive keys provide ornamentation and drama, shifting the track into more sunlit areas and interspersed by a melodic layer of wind accompaniment. Once again, it’s subtle… yet massively effective.

That said, while the aforementioned tracks are without a doubt standout, what’s slightly surprising about this release is that the orchestral sounds are blended, on occasion, with electronic beats – some a carefully-crafted take on the original sounds (think ‘Vienna’, with its famed introductory impact, ‘The Voice’ and ‘If I Was’). Sadly, however, with all three of these tracks, the softened beats that sometimes lack dynamic, seem to drive this portion of the album towards a synthetic and smooth-sounding sequence. To that end, and at those specific points, it’s as if the album isn’t always sure of its identity; reaching out and feeling for the occasional familiar ground in terms of its effect-driven guitar blends (‘Vienna’), reaching for the next part of the puzzle, while taking a snapshot of those original beats and reproducing them in more condensed, easy-listener friendly form.

Where the guitar instrumentation, and thus, contemporary take, really does work – and blends to perfection – is on ‘Fragile’. The album’s majestic closing movement is almost Queen/Gilmour-esque in personality, all fading to reveal a faint echo of ‘Your Name’ with its marked pulse (a subtle footprint from ‘Rage in Eden’ that you could almost miss).

It was always hard to determine whether Orchestrated was merely going to be a reworked version of classics or the sophisticated classical and larger than life reconstruction of both traditional and contemporary identity. Musically, it showcases a good backdrop upon which Midge sets his stunning voice. Touching, soothing, intimate, healing and even haunting, it’s never sounded better.

As an album, Orchestrated is diverse enough to pique interest. It’s contemporary enough to be relevant, and there’s enough classic tracks to reach out to fans. Representation of the originals is pretty much spot on, down to every tiny punctuating element you can think of – quite remarkable, really. Though, finally, it’s hard not to imagine this being some great symphonic masterpiece, had Billy Currie put his stamp on it. As it stands, the album – for some part – doesn’t quite move away from the contemporary pop arena (certainly when considering its lighter weight beats, systematically blended electric guitars and, not least, arrangements like ‘If I Was’). In other words: it’s good, and it certainly has its moments. But, with input from the likes of Currie it could have been taken to a new level of spectacular. Wishful thinking indeed.

For certain, on listening to a mostly laid-back Orchestrated (think festive period, snow falling outside, mince pies and malt to warm your spirits while enjoying serious contemplation), it’ll have you digging out your Ultravox albums and giving them a good old blast out loud. But, if nothing else, it might grow on you… if it hasn’t done so already.

Orchestrated by Midge Ure is out now on BMG.