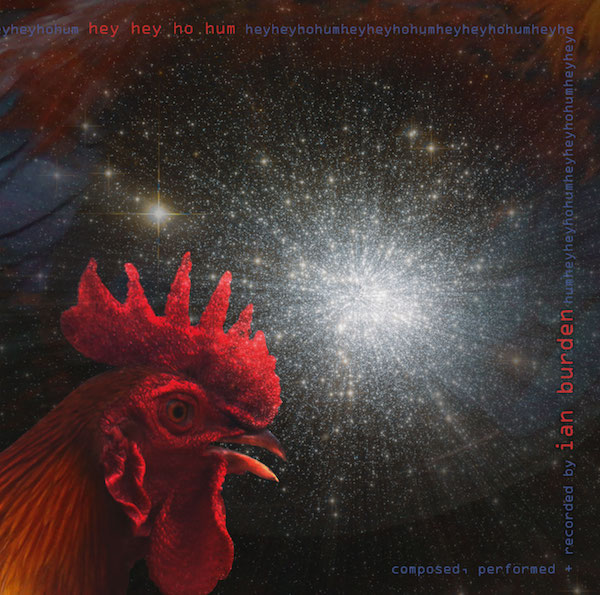 An accumulation of vintage synthesisers in his attic led to a decision to test them out and see if they could be passed on to other people to make use of. In the process of testing the equipment out, Burden began experimenting with riffs and chords and felt inspired enough to start recording these musical sketches. The end result formed the tracks that appear on Hey Hey Ho Hum.

Ian Burden’s early years seemed predisposed to an electronic music career. Growing up, he had an interest in the German school of music, listening to bands such as Can, Neu!, Kraftwerk and Tangerine Dream. Burden was fortunate to indulge this new interest in electronic music in a practical manner when his school acquired a VCS3, which he later learned to program.

After moving to Sheffield to study at university, his musical interests resulted in the formation of his first band Graph. When Graph split, Burden was recruited into the next incarnation of iconic synth-pop outfit The Human League. This proved to be fertile ground for Burden for both his skills in performing and also composing. Among the tracks that he helped co-write were classics such as ‘The Sound Of The Crowd’, ‘Love Action (I Believe In Love)’ and ‘Mirror Man’.

After several years of service in The Human League, Burden decided to call it a day. In the post-League period he worked on a select number of collaborative projects, including the 1990 album Loot! which experimented with digital sampling. In more recent times, Burden has lent his bass talents to Australian synth-pop outfit Parralox.

Many of the synths that feature on Hey Hey Ho Hum saw service in The Human League, which lends a sense of continuity to the album. Despite this, the album veers more in a prog rock direction than a synth-pop one. With lyrical themes of life in the English countryside (where Burden now lives) there’s very much an organic feel to the music, summed up in the lead single for the album ‘Let The Devil Drown’.

While Burden could have employed a singer for the material he composed, it seemed simpler to keep the project in-house. At a press conference for the album, he was quizzed on whether the decision to sing on the album was a natural response. “No because I don’t think of myself as a singer. I had to get the ideas down and then when I listened back, I thought “It’ll do”. No one has come along and said it’s terrible – yet!”

Burden certainly acknowledges the German school of electronic music, yet Hey Hey Ho Hum pulls its style and influences from other sources. Citing Aladdin Sane-era Bowie and pre-Dark Side Of The Moon Pink Floyd as an early window for the young Ian Burden on experimental approaches, it’s clear that the musician and composer holds these influences in high regard.

“The first music that really got a hook into me was David Bowie and particularly Ziggy Stardust and Aladdin Sane” suggests Burden, “And around that time, someone lent me a Pink Floyd album called Meddle. I’d never heard of them, but I listened to it and I was fascinated, because it was a standard rock band line-up of drums, bass, guitar, piano, organ and vocals. But somehow, they were pulling all these extraordinary sounds out of that standard line-up. I think because it’s their music, because it’s such a slow pace, with a lot of space in it, I kind of noticed what was going on, how they were experimenting with it. Then I’d go back and listen to David Bowie, particularly the Aladdin Sane album, I realised there was a huge amount of experimentation in that as well. I’m not sure how things fall into categories, but if Pink Floyd was prog rock, then I would have said that David Bowie was as well”.

The material on Hey Hey Ho Hum certainly throws more than a nod at Pink Floyd in places. There’s a warmth and a confident ear for composition on the tracks on display here, at times recalling the more bucolic outings by the likes of Dave Greenslade.

Burden’s vocals often have a breathy intensity to them which works to good form on lead single ‘Let The Devil Drown’. There’s also some surprising dynamism to tracks such as ‘Hanging Around’, ironic considering its a tune whose themes revolve around indolence.

‘Another Day’ opts for a more reggae-inspired rhythmic outing while ‘Big Big World’ has some Oldfield-esque guitar work in among its busy layers. There’s also a sense of optimism and hope weaved into the tracks on the album, particularly on the percussive rhythms of ‘Stay In Tune’.

The foundations for financing Hey Hey Ho Hum was crafted, like many albums these days, through PledgeMusic (an outlet that’s served the likes of OMD, Gary Numan, Erasure and Empathy Test well in the past). It’s perhaps a confident sign that both veteran musicians and contemporary artists can find common ground for financing and producing music.

Hey Hey Ho Hum occupies a very distinct field that might present an acquired taste for those coming in from an appreciation for the more synth-pop end of the spectrum. But Burden has a flourish for composition and producing interesting sounds from a diverse set of instruments. Inquisitive listeners will find their explorations yielding some satisfying results.