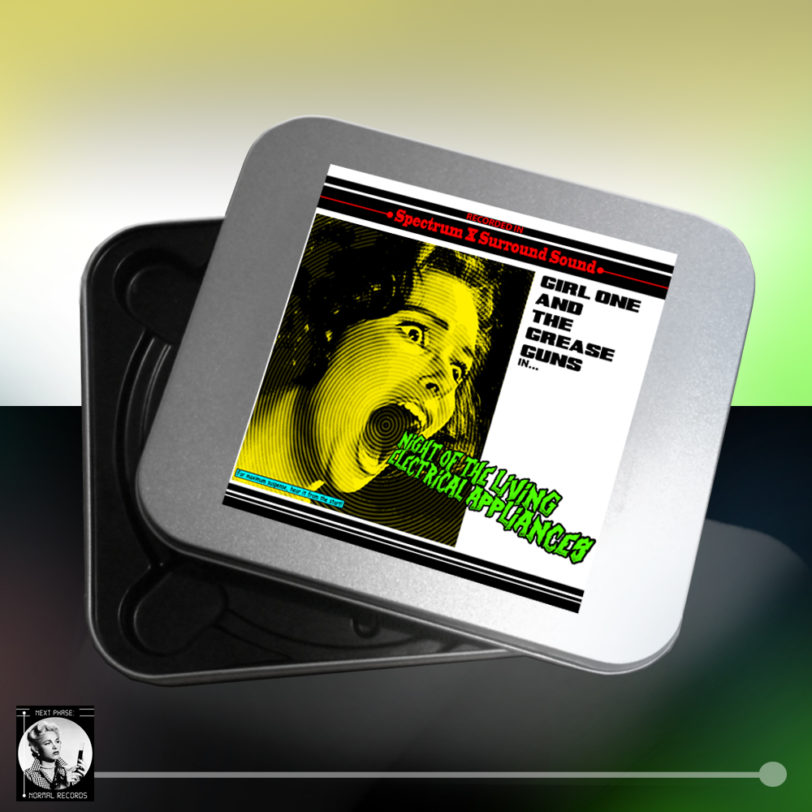 If there’s one grassroots act that we’ve enjoyed in recent times, it’s Girl One And The Grease Guns. Their earlier compilation release The Strange Little Lines That Humans Draw In The Dust, demonstrated a love for ’60s girl groups along with a ‘garage punk’ aesthetic that lent the music a raw, energetic quality.

Now the electronic outfit’s first proper album is due for release this July. Night Of The Living Electrical Appliances continues their bid for Longest Album Title in Electronic Music (and also not a band you’d want to go up against in a game of Scrabble) with 12 brand new tracks of eclectic goodness.

The original concept for the album, which was recorded at their own studio The Glass Factory, was a triple album. However, the Girl One gang decided that wasn’t such a great idea after all – and in fact they’re not keen on the idea of albums at all (their earlier output was all via 7” vinyl singles). But the tracks that they’d accumulated just screamed out to be included on a full length album.

Night Of The Living Electrical Appliances continues the Girl One And The Grease Guns approach to writing and recording. They’ve stated that the new material mixes “pure electro-pop with more experimental, darker sounding tracks”. As a result, the album boasts pop elements on tracks such as ‘He’s A Replicant’, ‘She’s A Calculator’ and ‘Emergency (Dial 999)’. But their more experimental side is evident on the likes of ‘Telegraph Street’, ‘Mute Your Gums’ and the eerie album closer ‘(She Sits) In The Freezer’.

The new tracks were influenced by a suitably diverse range of influences, including Cabaret Voltaire, Silicon Teens, and Crash Course In Science, as well as early Depeche Mode and The Human League.

The first 50 copies will also be available in a limited edition tin box, complete with artwork by Jon Aldersea at Goldphone Creative Media. All copies sold after that will be standard CD jewel case with booklet.

Night Of The Living Electrical Appliances is released on 19th July on Next Phase : Normal Records and is available to pre-order now from the Squirrel Records website (www.squirrelrecords.co.uk)