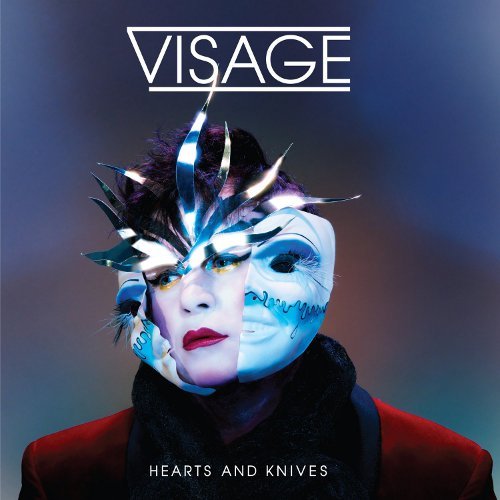 Destroy Yourself If You Love Me…

Having shared a lunch over a year ago with an animated Rusty Egan talking excitedly about the possibility of a new Visage album, this has been in the pipeline for a while – since 2010 in fact. Sadly things don’t always pan out as expected and the Visage planned didn’t come to pass. No song from Midge Ure; no contributions from Chris Payne… or even Rusty himself, as it happens. No original members behind Steve Strange, instead Steve Barnacle from a later incarnation and Robin Simon from early Ultravox have been drafted in to appear here and there, along with Welsh singer Lauren Duvall.

Which leaves us with Steve Strange’s voice, never the strongest even when Visage were at their peak and a collection of songs which the production team behind this album have ensured “sounds like Visage” – specifically the first two albums, with a few sonic nods to more successful times… a CR78 pattern from ‘Fade To Grey’, for example. It SOUNDS like it’s Visage… so from that point of view, it’s been a successful exercise. But proclaiming they’ve produced the album so it sounds like it was done in 1981/82? Well, why is that a good selling point in 2013? The questions are therefore raised – is it actually any good? And how does it compare to Strange’s last project, the god awful Detroit Starzz?

Well, thankfully, while Hearts And Knives is not a great album, there are some good things here for Visage fans. And no, it’s nothing like the execrable Detroit Starzz project. But while an impressive list of old synthesisers and production equipment has been used, the production – meant to sound like it was done in 1981/82 remember – is basic and flat. The drums were apparently recorded in a day. That’s not a good start.

The album kicks off with ‘Never Enough’… sequenced synth bass, Simple Minds-ish guitar. The song winds its way into your head – which is more of a testament to the song as it sounds unfinished, like a home demo, accentuated by the short sharp ending.’Shameless Fashion’ has been available as a free download for a while and is a good pointer for what’s on the album. A catchy chorus, pulsing synth bass, flat drums, semi-spoken vocals… albeit with a bit more guitar. It’s a pleasant enough 4 minutes.

Then comes the ‘Fade To Grey’ drums intro of ‘She’s Electric’; a bit more laid back this one. The verses have little going on and are really just a vehicle to get to the chorus which again has a hook. But again, let down by the bargain basement production values… the middle 8 keyboard solo sounds like it was done on a home keyboard brass patch but was apparently Mick MacNeil, ex-Simple Minds!

On ‘Hidden Sign’, Strange’s thin voice is painfully exposed on the verses – but another catchy chorus which with stronger production would deliver more. Am I repeating myself? Indeed! Many songs have Strange’s vocals doubled up by Duvall. ‘On We Go’ is a good example. Slow and atmospheric with some choppy guitar work but doesn’t really go anywhere without any studio cleverness to add any twists. The songs go from A to B to C without any real surprises en route. No sound ever takes you by surprise or hits you in the ears with any impact; no little twists to deliver something unexpected. A big noise has been made about the use of original analogue synths on this album but that’s no reason for them to sound so uninspired.

‘Dreamer I Know’ exposes the vocals on the chorus quite badly, despite the hooks. The song is good. The execution… well is almost an execution. It’s a singer’s chorus – and Steve Strange, with the best will in the world, is not a great singer. ‘Diaries Of A Madman’, by contrast – co-written with Magazine (and ex-Visage) keyboard player Dave Formula – has a bit of bite to it; Strange double tracking his own vocals which have a little more strength and menace to them. The chorus is catchy and simple.

So… what’s the conclusion then? Well, Hearts And Knives does have tunes on board. For that reason, give it a listen. More often than not it manages to sound like Visage. But for the most part one is left with a feeling of “if only…”! With today’s music buying market expecting immaculate production, perfect vocals, and quantised timings, it IS a relief that Strange wasn’t autotuned to death – but more could’ve been done with his vocals, with the drums, the synth sounds, the production… while keeping it sounding like Visage. Ultimately it’s annoying that whoever is behind this project seemingly was only half interested in making it as good as it could possibly be. And how did it take them over 2 years to make it?

When many bands of old have come back with excellent, revitalising comeback albums (The Cars, Devo, Duran Duran and Men Without Hats as recent examples here), just trotting out a 9 song album and badging it as “Visage” isn’t enough!

With thanks to Vicky Berry at Quite Great PR.
‘Hearts & Knives’

Flip Martian presents a fortnightly Monday evening show ’Selection Box’ and a weekly Tuesday evening in concert programme ‘Live and Loud!’, both at 20:00 GMT on http://www.radio-happy.com/