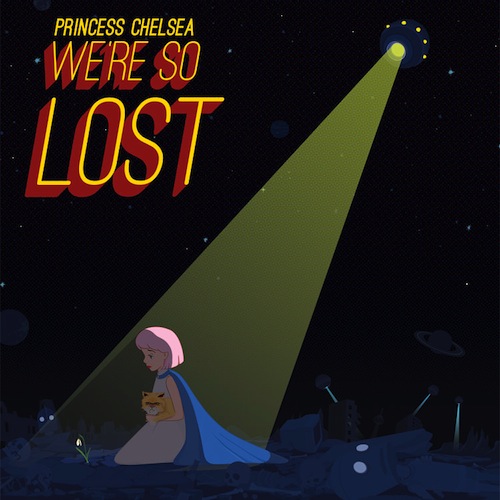 Princess Chelsea produced one of the best sleeper albums of 2012 in the shape of Lil’ Golden Book whose fragmented slices of electronic charm and wistful tunes came as a refreshing change and demonstrated the versatility and range of modern day electronic music.

Following on from the release of Lil’ Golden Book, Princess Chelsea has embarked on a series of extensive live performances through Europe – including another date in London this year. Ably assisted by Lil Chief associates Pikachunes, Jamie-Lee Smith and Jonathan Bree, Chelsea’s performance at the Seabright Arms showed that her live shows have lost very little of the magic and allure of her previous London gig last year.

Despite some minor technical issues (due in part to some new vocal treatments that Chelsea had introduced to the show) the performance was flawless and also demonstrated the range of instruments that Chelsea can handle, switching effortlessly between synths to bass guitar to triangle as the occasion demanded.

Although the live show is still showcasing the Lil’ Golden Book album, there’s now room for snippets of new material including the percussive ‘No Church On Sunday’ (which was penned by Jamie-Lee) and ‘We’re So Lost’ which marks Princess Chelsea’s first single release in the post-Lil’ Golden Book period.

‘We’re So Lost’ has a glacial opening refrain backed with the electronic arpeggios that marked out earlier tunes such as ‘Machines Of Loving Grace’. Chelsea’s vocals give an evocative quality to the song and if your hairs aren’t standing up on the back of your neck while listening, then you must have the emotional response of a fired brick. The manga-esque sleeve art helps to sell a picture of loss and redemption.

The live show also gave us a real surprise in the shape of Princess Chelsea’s cover of Black Sabbath’s eponymous track. Giving the band the chance to rock out came across as indulgent — and also lots and lots of fun (particularly for Pikachunes hammering the skins with a huge grin on his face).

Not content with that as a finishing song, the crowd demanded more and Chelsea relented with her baroque electronica cover of White Town’s ‘Your Woman’.

Chelsea is currently continuing touring through Europe (including dates with Ghost Capsules), but is also working away at her second album which, judging by the icy strains of ‘We’re So Lost’, suggests that the superb Lil’ Golden Book may not have been a pure one-off wonder.