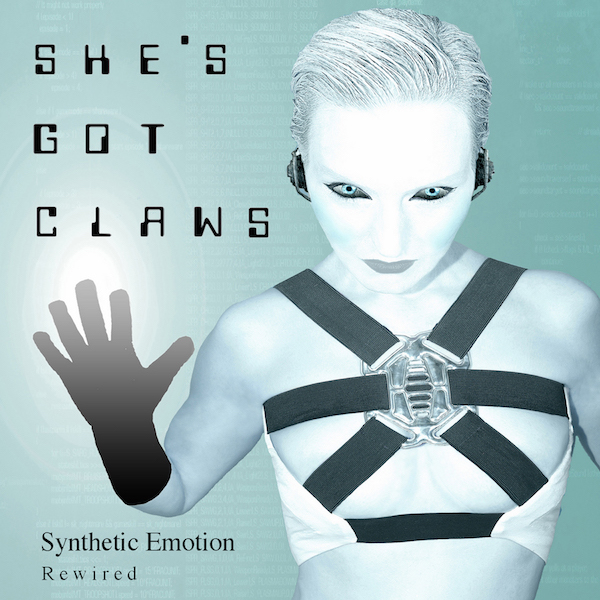 The starkly resonant electronic tunes of She’s Got Claws made a significant impact with the release of new album War Torn earlier this year.

But it wasn’t just The Electricity Club who were acknowledging the talents of this female electronic musician and composer. OMD’s Andy McCluskey had also championed her work previously, commenting on Synthetic Emotion at the time: “The tracks ‘I Die for You’ and ‘Hurt Beat’ are two of the best modern electronic songs you will ever hear”. Meanwhile, iconic electronic musician Chris Payne was equally impressed and signed her to his publishing company.

Back in 2015, She’s Got Claws released the Synthetic Emotion EP. The compositions on this release offered a concept exploring themes of synthetic love, or as She’s Got Claws explains: “a beautiful electronic love story from the robot’s point of view and how she deals with human emotion”.

Fresh from the release of War Torn, the tracks on this early EP have been remastered along with new artwork for a timely reissue. Timely, because the ideas of artificial intelligence and advances in robotic technology are reflected in a culture increasingly fascinated with the concept.

Science fiction has, of course, been the foundation for a lot of these ideas, from the idea of artificial life developing human traits, as with the character of Data in Star Trek The Next Generation, through to erasing the line between the artificial and the human completely – a concept explored in the anime series (and recent western adaptation) Ghost In The Shell.

More recently, the weighty moral issues associated with AI and synthetic lifeforms have been the staple of the TV show Westworld. A visually stylish TV series, it’s an intriguing (and often brutal) window on the possible evolution of artificial intelligence.

Many of these ideas are also being reflected in real life technology. Google is busily conducting research that advances the use of AI in a variety of different fields. Meanwhile, companies such as Boston Dynamics are developing eerily familiar robots that are increasingly more and more like their science fiction counterparts.

‘I Die For You’, which opens the EP, looks at the creation of an artificial human-like robot. As she grows and learns, she sings to her creator. The staccato rhythms on the track combined with the treated vocal effects give this song an oddly evocative feel. The sultry vocal delivery on the chorus offers up curiously effective yearnings of synthetic love (“Hold me close you’re my maker/I would die for you”).

There’s a colder, more mechanical feel to ‘Hurt Beat’. Here, the lyrical elements deal with loss and the burden of emotions (“If this is really love/then why do I feel blue?”). As our artificial human has to contend with the death of her creator, the song adopts engaging electronic melodies that throw a nod to classic electronic outfits such as Kraftwerk.

Inspired by her creator’s work, our robot protagonist explores the idea of creating her own companion. ‘Manchine’ offers an electronic reverie on crafting her creator’s likeness in an artificial form. The machine-like rhythms blend in with some captivating synth stylings, giving a polished sheen to the whole affair.

The closing track ‘Utopia’ posits thoughts on the future of mankind as a race of artificial lifeforms. Here, there’s a robust, buzzy sensibility to the tunes on a busy layered composition. Synthetic melodies zip back and forth on a song that throws a nod to dancepop in its execution.

Synthetic Emotion is a perfect companion piece to War Torn, offering a similar raw quality to the electronic compositions within. As both a concept and a collection of songs it also offers a further demonstration of the talents that She’s Got Claws has to offer.

Synthetic Emotion (Rewired) is out now on iTunes, Amazon and streamed on Spotify and Apple Music.