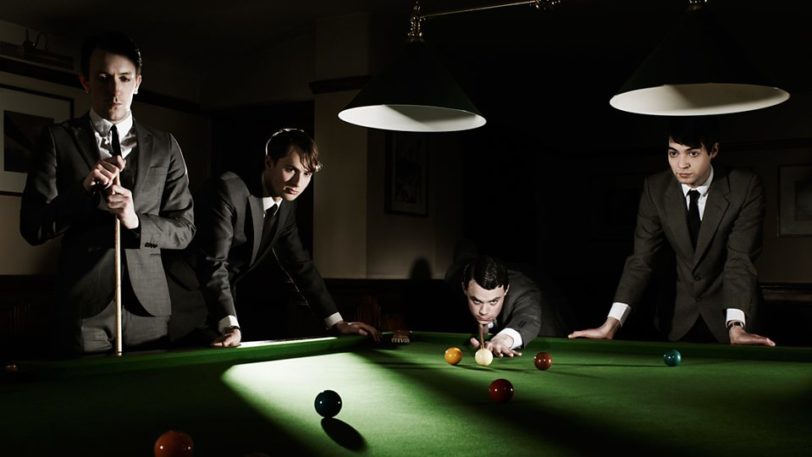 When Mirrors played a special music industry showcase at Ronnie Scott’s club in London’s Soho, The Electricity Club were in attendance. Hosted by Skint Records, the event was an intimate affair aimed at bringing the Brighton quartet’s distinctive pop-noir to the attention of the music business influencers.

The band rose to the occasion, delivering a flawless performance. Arriving onstage to ‘Fear Of Drowning’, they each cut a striking figure in their matching grey suits and black ties. For Mirrors, visual presentation is all important, and as a live act they are quite mesmerising to watch. Vocalist James New exudes an endearing vulnerability, whilst keyboard player Ally Young appears to lose himself in the music. Josef Page on electronic percussion and Tate on synths take their visual cues from Kraftwerk, staring moodily into the crowd.

The set previewed the forthcoming album Lights And Offerings, due out in 2011, and showed why this really is a record to look forward to. Whilst Mirrors’ sound has reference points in the past, James New’s vocal provides a warm, soulful depth to the crisp electronic backdrops, and the end product is fresh and utterly compelling.

Mirrors will soon be seen supporting OMD on the European leg of their tour. During their set they gave a subtle nod their electro forefathers as the intro to single ‘Ways To An End’ morphed momentarily into OMD’s ‘Messages’. Those who are attending any of OMD’s European dates would be well advised to arrive early, as this is one support band not to be missed!

On the strength of this very special show, hopefully the band will start cropping up on the “Ones To Watch” lists in the mainstream media. 2011 could well be the year of Mirrors.

On sale during the tour will be a CD EP entitled Broken By Silence which will not be available online. Several of the tracks are exclusive to this EP in CD form and will not feature on their forthcoming album. One particular highlight is the ‘motorik’ Belbury Poly Mix of ‘Lights And Offering’s while B-sides ‘Broken By Silence’ and ‘Toe The Line’ are essential listening for the discerning electronic music connoisseur.

The tracklisting of Broken By Silence is:

Mirrors will also play a UK short tour supporting We Have Band on the following dates:

With special thanks to Richard Snow of Skint Records