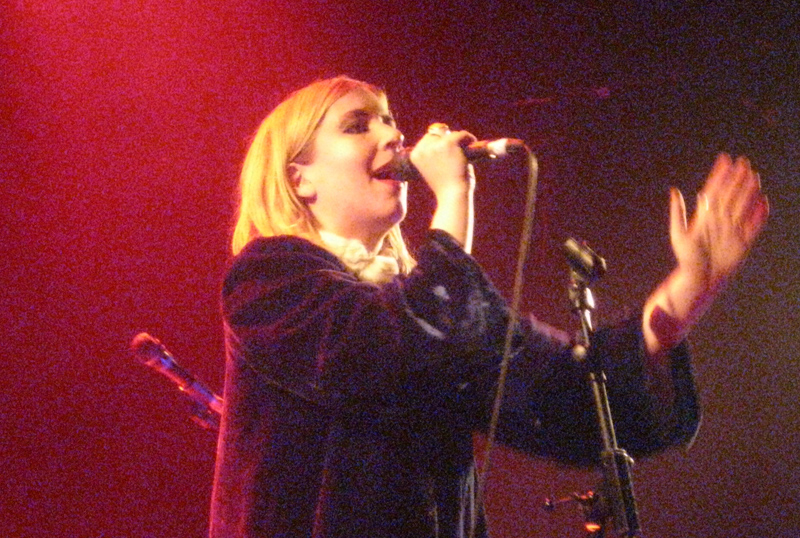 It takes a lot to draw us out into a chilly November evening, but Austra provide a suitably attractive prospect. Following on from the release of critically-acclaimed new album Olympia, the sold-out Koko in Camden is proof of the Canadian outfit’s continuing popularity. Along for the ride tonight are two support acts, fellow Canadian outfit Diana and Welsh guitar band Deaf Club. Diana deliver serviceable pop numbers, but surprisingly it’s Deaf Club that manage to stand out. Eschewing the rote retro approach employed by many contemporary guitar acts, Deaf Club present a shimmering layered wall of sound augmented by the dreamlike vocals of Polly Mackey. The finest moment has to be the epic tones of final song ‘Postcard’, which bring to mind the ethereal washes of Slowdive.

At this stage we have to pause to comment on the sound mixing at Koko for the evening’s entertainment. It may have been simply the unfortunate positioning of myself being next to the right hand speaker stack, but at times the level of bass was not unlike having socks forcefully stuffed in your ears. Certainly, Austra’s entry to the stage to the delicate tones of ‘What We Done?’ is given all the charm of a foghorn being let off at the bottom of the Marianas Trench. Despite this, the carefully layered elements of the track build to an electropop stomper. The muddy sound also took the edge off solid Austra classics such as ‘The Villain’ – normally a high point of Austra’s live arsenal.

Not that this prevents the ever-professional Katie Stelmanis from delivering a sterling performance – with a surprising amount of energy as she bounds back and forth from synth to microphone, simultaneously dancing to each end of the stage throughout the set. Kitted out in a ghostly white dress and precariously large platform shoes, her distinctive soaring vocals power out across the stage.

Austra’s live unit has been trimmed down lately due to the Lightman twins taking time out to form their own musical outfit. It’s an absence that does have a notable effect on some songs, particularly the dreamlike ‘Painful Like’ and the evocative moods of ‘Reconcile’. But there’s still a good chemistry at work with the band tonight with Maya Postepski’s percussion, Dorian Wolf’s bass and Ryan Wonsiak’s synth all providing a solid backing to the talents of Miss Stelmanis. ‘Home’ is given a much more robust live delivery – and also elicits one of the most euphoric responses from the packed venue. Meanwhile, the infectious choral qualities of ‘Lose It’ also get the crowd jumping up and down, with Katie encouraging the audience to sing along.

‘Beat And The Pulse’ is turned into a frenzied blizzard of force on stage. Maya Postepski’s frantic drumming giving this popular slice of Austra’s catalogue a fresh energy.

Austra encore with the funk-infused ‘Annie (Oh Muse,You)’ and a superb rendition of the brooding ‘Spellwork’ which never fails to raise the hairs at the back of your neck.

Finally, the ominous tones of ‘Hurt Me Now’ bring proceedings to a close, serving as a reminder that Austra appear to be uniquely qualified to serve up brooding, dark material that nevertheless has an optimistic and at times euphoric feel to it.