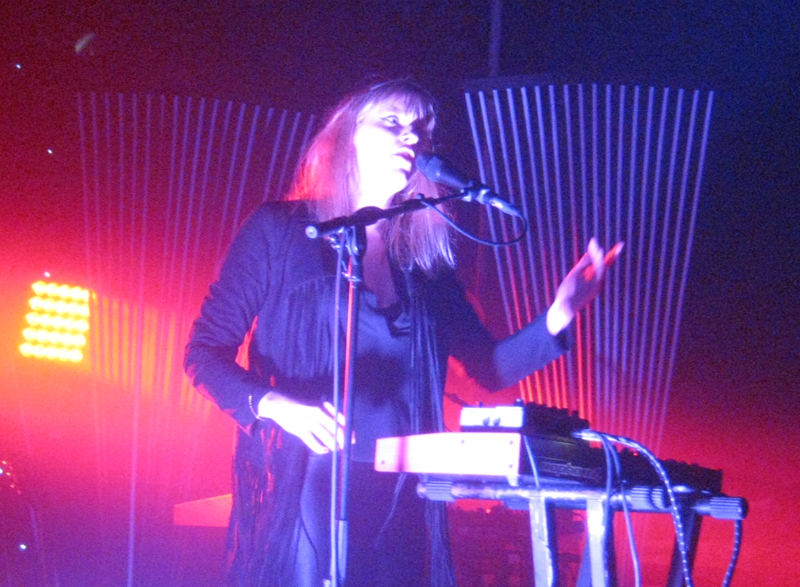 While the Nordic charms of Susanne Sundfør have been present for several years, it was the release of her latest album Ten Love Songs that appears to have pitched her music career into a much more noticeable spotlight.

Now with the album receiving broad critical acclaim, Sundfør has kicked off her tour with the first gig at London’s Scala (an upgrade from the original venue of choice from The Lexington). Joining her for the tour is fellow-Nordic outfit Apothek.

Painting glacial landscapes of electronic melancholy, there’s more than a few standout moments from Apothek’s performance, including the percussive delivery of ‘Waiting For The Thunder’ and the spaced-out drama of ‘Family’. It’s probably an obvious comparison, but the songs at time bring to mind the melancholic charm of fellow Norwegians A-Ha.

Time then for Susanne Sundfør to take to the stage to the rapid-fire electronic percussion of ‘It’s All Gone Tomorrow’ (from her 2010 album The Brothel). The machine-like rhythms of the intro lend Sundfør time to look over her equipment, in particular her acoustic guitar, before settling into the song proper. It’s a song that showcases the singer’s particular vocal range as she delivers a choral trill that at times suggest the operatic vocals of Katie Stelmanis from Austra. An ominous electronic buzz heralds the start of a particularly affecting version of ‘Trust Me’, which sees Sundfør delivering the vocals from a prone position kneeling on the floor. The darkness of the stage is offset by a broad field of stars in the background, suggesting the broad cosmic world that Sundfør’s material inhabits.

Meanwhile, ‘Kamikaze’ delivers the widescreen pop that Sundfør has crafted so well on the Ten Love Songs album. For all its nods to dance pop, it’s a powerful, haunting song with its heartfelt lyrics and Sundfør at times appears to be in her own world when singing them.

Ambitiously, Sundfør has also slotted ‘Memorial’ into the setlist. This 10-minute epic occupies a strong position on the Ten Love Songs album with its broad, cinematic approach and orchestral segments (care of the Trondheimsolistene Ensemble). Taking up her acoustic guitar for a live rendition, Sundfør delivers a serviceable, if somewhat truncated, version of the song. Arguably, the sheer impact of the original suggests that any live version is going to fall below the mark regardless. The aggressive tones of ‘Accelerate’ erupt in a cacophony of electronics as Sundfør effortlessly alternates between playing her Mopho X4 synth and giving her tambourine a good shake. The closing beats of the song then segue into the familiar melodies of ‘Fade Away’, eliciting a huge cheer from the audience. “This is the kind of love that never goes out of style” implores Sundfør as the song delivers more of that cinematic pop that makes her recent material so compelling.

The discordant, fractured intro of ‘Insects’ is offset by Sundfør’s laconic vocals, but the song later steps up a gear as the staccato rhythm of the drums kicks in for the air raid intensity of this pop stormer.

At this point, things slow down for a brief reflective interval as the icy instrumental ‘As I Walked Out One Evening’ is performed, with Sundfør conjuring forth a delicate melody on a sansula (a form of African acoustic instrument). Then Sundfør announces the last song before giving a superb rendition of ‘White Foxes’. It’s an apt tune as its icy intensity and spacious pop offer up the bridge between The Silicone Veil album and Ten Love Songs.

After filing off stage to rapturous applause, there’s barely a minute gone before Sundfør and her band are back on stage for the encore. The ominous bassy opening notes should have alerted the audience as to what was coming next, but it was only when Sundfør uttered the first lines of ‘Delirious’ that a huge cheer went up. The song was given a particularly percussive effort, reminding us that it’s probably the most powerful weapon in her current musical box.

With the closing bars of ‘Delirious’ barely over, Sundfør takes to her synth for the sepulchral melodies of ‘Your Prelude’ (another cut from The Silicone Veil album). It’s given a particularly haunting delivery in its live setting and it’s a fine song to end with.

Arguably, Susanne Sundfør may have given us the album of the year in Ten Love Songs – a noble feat considering we’re barely 2 months into 2015 – and the enthusiasm of the audience in London confirms she’s a very special talent indeed.