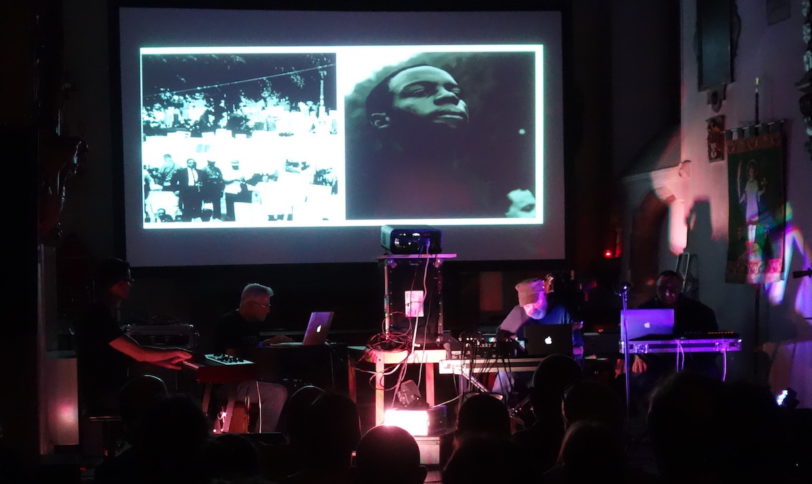 Ambient outfit Marconi Union are probably best known for their soothing composition ‘Weightless’, a piece whose genesis arrived after consultation with a sound therapist. The finished work was considered “the most relaxing tune ever” (to the point where people were advised not to listen to it while driving!).

The 3-piece electronic band have been in operation since 2003’s Under Wires and Searchlights album, which marked their debut. Since then, Jamie Crossley, Duncan Meadows and Richard Talbot have steadily built up a profile for textured, instrumental music.

The announcement that Marconi Union were performing possibly their only concert this year generated enough interest for a sold out event. The fact that the band had also invited Digitonal and Fire_Sign along as support just added the icing to this particular cake. Selecting St Pancras Old Church as the venue of choice also gave the event a suitably dignified backdrop.

Digitonal opened the evening’s musical delights with an impressive performance. Andrew Dobson has been ploughing his own particular brand of electronic music since the 1990s. There’s a serene beauty to much of Digitonal’s cinematic electronica, which takes on fresh qualities for live performances as witnessed at the 22rpm event earlier in the year (see TEC review). As at 22rpm, Andrew is joined on stage by Dom Graveson to combine widescreen visuals with relaxing ambient elements that tonight revolve around a circular motif. Throughout the set, titles appear on the screen to give each piece a suitable theme.

Things start slowly with a low ambience broken only by sporadic bursts of electronic chatter (actually sampled computer noises from the film Alien). A slow tracking shot of a brightly lit forest appears as an indistinct ghostly vocal drifts back and forth. A profound message states: ‘A Very Easy Place To Disappear’ before segueing into a static seascape shot accompanied by a melancholic tone and soft clarinet elements.

As the soundtrack itself slowly evolves, so too do the visual projections, mesmerising the audience with starscapes and planets. A hymnal organ beats a steady refrain as dub-like effects drop in and out. Striking images of spacecraft fill the screen as the music takes on an evocative quality. There’s a sense of isolation delivered through a series of blighted landscape shots with subtle choral elements accompanying the music.

The space theme continues with a simple title: ‘Into The Infinite’ accompanied by an extreme camera zoom out to a galaxy-wide perspective. There’s a more bass-heavy foundation for the music at this point, peppered by odd electronic percussive effects. This also includes live clarinet work that lends a welcome organic element to the piece.

Fire_Sign first cropped up on TEC’s radar back in 2017 With their song ‘Sweet Oblivion’. The London-based duo of Chris Stickland and Sarah Glayzer draw from a rich well of influences that includes Zero 7, Dusty Springfield, Massive Attack and Björk.

Labelling their music as “Doomtronica”, the result is a very lush, warm approach to electronic music. Tonight, there’s an intriguing mix of dub beats and bluesy vocals set against abstract visual projections. As with Digitonal’s set, some of Fire_Sign’s set appears to segue from one track to the next. In one instance, Sarah opts for a brief cover version of ‘Wicked Game’, which comes across as if rendered by This Mortal Coil.

While the other acts tonight opt for an instrumental approach, the inclusion of Fire_Sign’s vocal dynamics gives the evening a nice contrast to the more ambient outfits.

With a brief break between acts, its then time for Marconi Union themselves to take to the stage. Their set selects compositions from across the lengthy history of the outfit, including from their debut Under Wires and Searchlights album.

‘Weightless (Part 5)’ offers a shimmering soundscape that adds on a throbbing bass foundation. Meanwhile, ghostly electronic elements dart back and forth.

There’s touches of Brian Eno on later pieces which also incorporate dub effects and warm synth elements in places. Meanwhile, oddly evocative projections which appear to be culled from some lost film library run in tandem with the immersive music.

On ‘Abandoned/In Silence’, the outfit are joined by Digitonal to lend some clarinet talents to the piece. Here, a sober piano melody meets warmer synths. The final track, ‘Sleeper’, has a more fragmented quality to it with slightly incoherent vocal elements. A steady rhythm is added to the composition building up to a busy layered composition with staccato percussion.

In the darkened confines of St Pancras Old Church, the music seems to have a natural home. For those enthusiasts of the more ambient side of electronica, this evening provided a perfect showcase of some of the talents the scene has to offer.