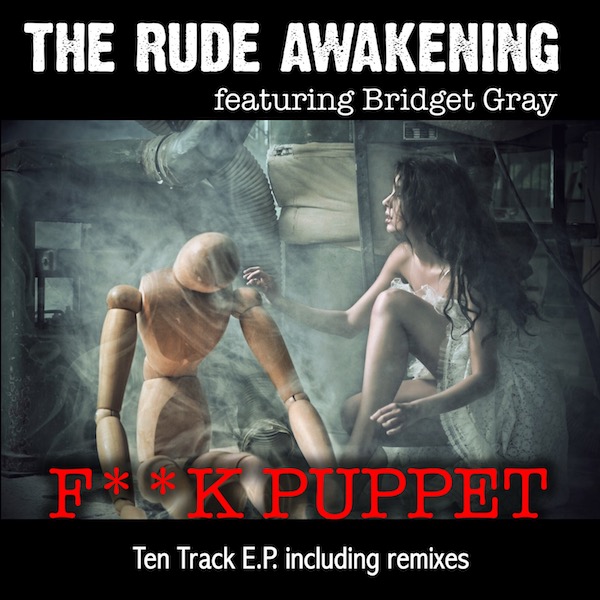 The Rude Awakening has established itself as a musical venture capable of delivering defiant messages and sordid synth outings. This delving into the realms of sexual fantasy continues on their latest release, with the unequivocally blunt ‘Fuck Puppet’.

As a project envisioned by Johnny Normal, who also juggles time as a radio presenter and music promoter, The Rude Awakening offers the electronic musician a fresh platform to present his synth offerings. Although their first release ‘Let Nothing Take Your Pride’ featured the vocal talents of Brooke Calder, the subsequent outings have brought on board the abilities of Bridget Gray. As part of synth outfit Destination (and also a fellow radio presenter), Bridget has the vocal chops to lend an additional dimension to The Rude Awakening.

Addressing the new release, Johnny Normal comments: “Fuck Puppet is an unashamedly blunt modern expression of love and lust between two people who explore their emotions and needs and share a fascinating and intimate relationship.” On that basis, it follows on neatly from the strong sexual themes of ‘Your Wetness Is My Weakness’ which arrived last June.

There’s a suitably grungy feel to the song which has a muscular, chugging drive to it. There’s also a nice line in synth melodies in the mix which gives the track an electronic appeal. Meanwhile, the juxtaposition between Bridget’s gossamer vocals and Johnny’s more emphatic delivery lends the tune an intriguing spectrum of contrasts. As ever, Nature of Wires show why they’re a regular draw for remix duties. Their ‘Thunderbirds Are Go’ remix pushes the synth stylings of the song to emphasise its engaging melodies. Def Neon paint the tune in fluorescent colours, while the Ugly Nature ‘Hands Up’ mix strips things down and focuses on the vocal elements of the song. Meanwhile, Palais Ideal lend some bassy delights to proceedings.

‘Fuck Puppet’ offers up sensual synth moments that continue to build the foundations of The Rude Awakening’s flourishing catalogue of tunes.

Fuck Puppet is out now on Pink Dolphin Music/AbNormal.