Home » Features » The Music of GHOST IN THE SHELL 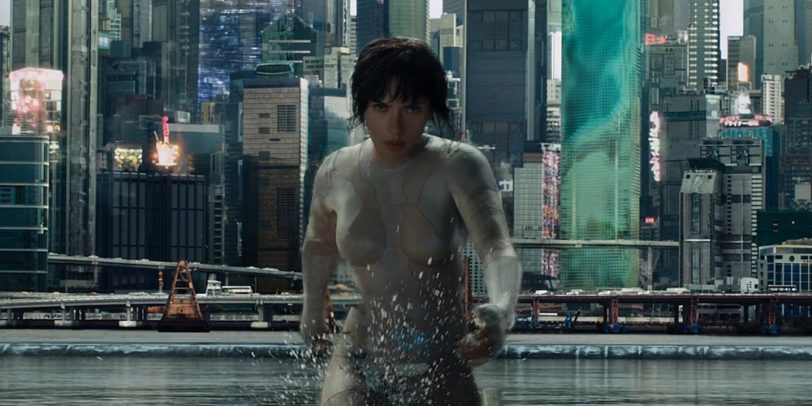 The business of scoring a film soundtrack has, in recent times, resulted in the soundtrack often having as much cultural impact as the film itself. The 2011 crime thriller Drive for instance cribbed from synthwave and had a carefully curated soundtrack that boasted the likes of Electric Youth and Kavinsky.

Meanwhile, the forthcoming adaptation of classic anime Ghost In The Shell appears to be leaning heavily towards an electronic-influenced soundtrack, while also chucking in a few surprises along the way.

Originally a manga series, Ghost In The Shell is perhaps best known for the 1995 anime adaptation which has since become one of the most iconic classics of the anime genre. Set in the near future, Ghost In The Shell focuses on the character of Major Motoko Kusanagi, a special operative for the counter-terrorism outfit known as Section 9. The themes that the film (and later anime series) explored revolved around political intrigue, corruption and terrorism, but also looked at the concept of identity and the influence and evolution of artificial intelligence. The Major has a completely cybernetic body in which her “ghost” resides, enabling her to have superhuman abilities as well as the skill of hacking computer systems.

For the live action adaptation, Scarlett Johansson takes on the role of The Major for an adaptation that has attempted to be a largely faithful recreation of the anime. It’s a film that hasn’t been without its controversies (particularly surrounding the casting of Johansson) and the ‘cyberpunk’ aesthetic has been a tough thing to capture successfully on film in the past, but the visual design and approach employed by the film makers looks promising.

The soundtrack for Ghost In The Shell is being scored by Clint Mansell. The former Pop Will Eat Itself frontman, Mansell has carved out an impressive resume in film soundtrack work that includes Requiem For A Dream, Black Swan and the JG Ballard adaptation High-Rise. Mansell has also championed the dystopia duo of Jupiter-C, adding a remix to their recent release.

Meanwhile, attentive electronic music fans would have noticed the familiar tones of Depeche Mode’s ‘Enjoy The Silence’ in some of the trailers. The version used for Ghost In The Shell is a cover by Ki:Theory, aka US musician and producer Joel Burleson. Batting between the worlds of rock and electronic music, Burleson has previously done remixes for the likes of Ladytron, Daft Punk, UNKLE and Hans Zimmer.

Gary Numan has also contributed to the soundtrack, in the form of the brooding soundscape of ‘Bed Of Thorns’. The track had emerged in demo form from Numan’s production of forthcoming album Savage. The new album has been the focus of a Pledgemusic campaign – with ‘Bed Of Thorns’ one of the tracks that had originally been aired for people pledging to the campaign.

The film also features contributions from DJ Shadow, Above & Beyond and producer and composer Johnny Jewel (Glass Candy, Chromatics). Jewel had also previously contributed to the successful soundtrack for the aforementioned Drive. Trip hop figure Tricky also appears on the soundtrack with the oddly muscular track ‘Escape’.

There was some debate over Steve Aoki’s contribution however. The EDM producer and musician’s radical take on Kenji Kawai’s original theme music for the 1995 anime was largely derided by fans (However, Kawai’s original version of the theme is apparently also present and correct in the film). These tracks will also feature on the forthcoming album Music Inspired By The Motion Picture Ghost In The Shell whose tracklisting is as follows:

Whether or not Ghost In The Shell manages to win audiences over remains to be seen, but the continued use of electronic music in film soundtracks is certainly a trend that deserves to continue.

Ghost In The Shell is released 31st March.

Music Inspired By The Motion Picture Ghost In The Shell is released 31st March. Pre-order via: https://ghostintheshell.lnk.to/album