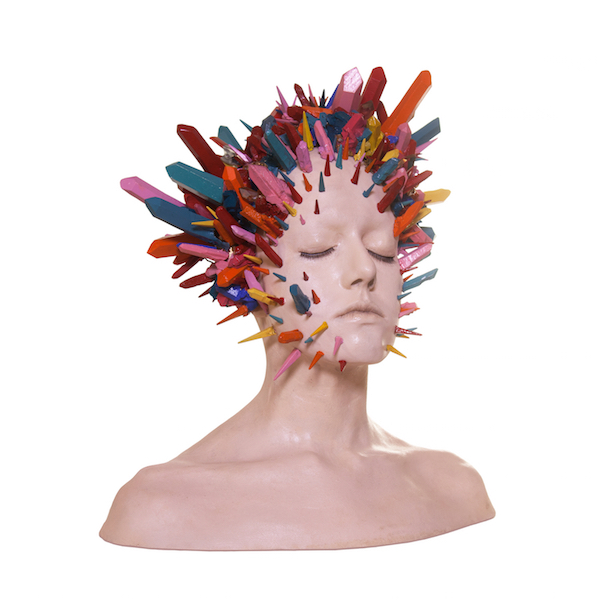 Electronic pop gets introspective on the debut album from Pixx…

Taking her name from a nickname associated with her grandmother, Hannah Rodgers embarked on her musical career as Pixx in 2015. A former Brit School student (where the likes of Adele and Amy Winehouse had their roots), Rodgers signed to the 4AD label at the impossibly young age of 19.

Her first release was the Fall In EP, a deeply personal collection of songs that drew critical praise and led, in turn, to stints at festivals such as Glastonbury. Since then, she’s performed with the likes of Lush and Austra and established a reputation for particularly energetic live performances.

Now with the release of her debut album The Age Of Anxiety, Pixx has collated a clutch of new songs under a title culled from a WH Auden poem (in fact the title was taken from a notebook that Pixx was given by her brother).

Anxiety is an element that Rodgers endured from a young age, particularly suffering from insomnia caused by persistent nightmares. Songs such as the bassy ‘A Big Cloud To Float Upon’ refer back to her being in primary school age 9 and watching the clock slowly count down. Every ‘tick’ represented one step closer to the dreaded time when she’d have to go to sleep.

Occupying a landscape that appears equidistant between Grimes and Austra, The Age Of Anxiety as a whole presents a collection of songs that offer up electronic music that’s both accessible, yet also has a sense of quirkiness and charm. ‘I Bow Down’ for instance has an insistent beat that jumps out, while ‘Grip’ gives up a busy rhythmic soup that coalesces into a perfect pop moment.

Elsewhere, ‘Telescreen’ opens up with some Siouxsie-style goth guitar work before delivering a shimmering number whose gossamer depths manage to offer space enough to swim in.

‘Everything Is Weird In America’ is, as the title suggests, inspired by her first visit to New York. It also acts as a suitable showcase for Rodger’s soulful lyrical delivery: “There’s lot of land and there’s lots to see/you’ll have no idea where you’re supposed to be”.

But perhaps one of the album’s finest moments is ‘Waterslides’. Its plucked melodies steering the listener to the engaging chorus: “Don’t follow me into my dreams you don’t belong here”. As with much of the material on the album, ‘Waterslides’ was inspired by a odd nightmare of being trapped in a waterpark surrounded by faceless figures.

The seductive charms of ‘Your Delight’ is another immersive dreampop world which entices the listener to be drawn in by its mesmerising melodies. Meanwhile, there’s a timely theme to ‘The Girls’ in which Pixx pointedly sings about girls “running to their fate” by turning to boys “who are no good treat them like toys”.

While the themes of anxiety run through the album like a constant beacon, there’s hope in the last track ‘Mood Ring Eyes’ whose dream-like rhythms conjure up images of early mornings and brighter dawns.

The Age Of Anxiety is an album that offers up a combination of smart pop tunes married with thoughtful lyrics, which at the same time presents an evolution of electronic music that suggests there’s still horizons to reach for. In a recent interview, Rodgers herself appeared to address the issue of nostalgia and retro acts with a philosophical quote: “There are a lot of people who are just trying to recreate things that have already been done, because they’re almost scared of the way modern music sounds, but we do have technology now that allows us to make quite insane-sounding music. And… we are in 2017”. Quite!

The Age Of Anxiety is out now on 4AD.