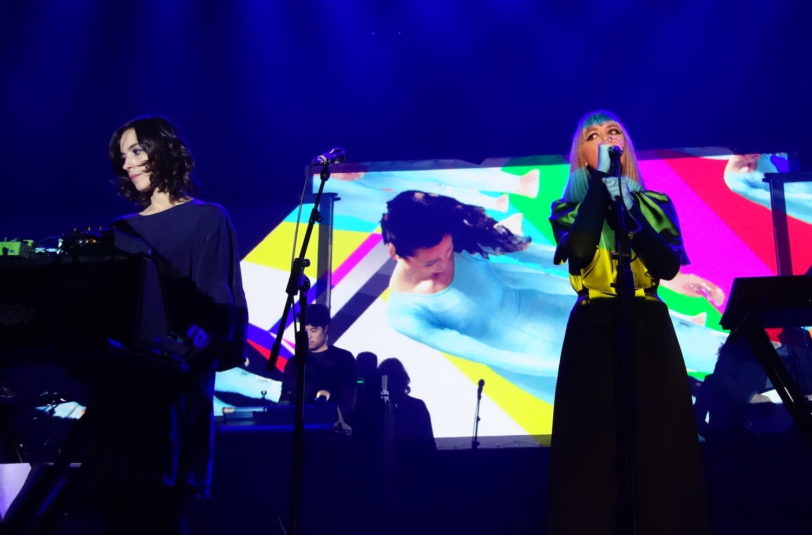 The post-britpop years gradually gave rise to a renaissance of sorts for electronic music. With so many diverse acts currently ploughing their trade, it’s perhaps difficult to remember how barren the landscape was at the start of the 2000s. But one act in particular emerged at the time to act as a herald for the return of synth-pop.

Liverpool’s Ladytron imbued a crunchy electronic sound that showed a love of analogue synths. This was married with a stylish vocal approach that sounded quite unique for the early noughties. Originally created by Daniel Hunt and Reuben Wu, the fledgling electronic outfit were later joined by Helen Marnie and Mira Aroyo. They rapidly gained critical appraisal – particularly through the release of their 2001 debut album 604. Tracks such as ‘Discotraxx’ and ‘Playgirl’ presented an odd combination of warm electronic music that threw a nod at dance music, but also exhibited an intriguing lyrical narrative.

Ladytron managed to maintain an impressive level of quality across subsequent releases, particularly on Velocifero (2008) and Gravity The Seducer (2011). But the band went on hiatus as 2012 rolled around, allowing Helen Marnie to pursue some solo endeavours. Although Marnie remained coy on commenting on any possible Ladytron revival in interviews, rumours of the band reforming finally came true with the 2018 announcement of a new album.

Funded by a PledgeMusic campaign, their sixth eponymous album has been gaining interest via early releases such as ‘The Animals’ and ‘The Island’. The album’s October release date was subsequently put back to February 2019, although the band had already marked out a limited series of live dates previously. On that basis, the London concert offers up an unusual showcase of Ladytron old and new (although tellingly, no new material – aside from the two previously released tracks – from the new album is unveiled tonight). London’s Roundhouse has become a popular venue for Ladytron’s contemporaries (OMD performed here earlier in the year) and provided a fitting spot for the London leg of their tour.

Support comes from fellow Liverpool outfit Stealing Sheep, whose quirky combo of performance art and art-pop makes for a suitably engaging overture for Ladytron’s own performance. Intriguingly, the trio that make up Stealing Sheep opt for spangly jumpsuits, which is a reminder perhaps of Ladytron’s early uniformed outings.

There’s a huge cheer when Ladytron finally file out on stage, augmented by two additional live musicians (including Glasgow’s HQFU) which also adds a live drums component to the set.

The set kicks off with the angular beats of ‘Black Cat’, culled from Ladytron’s 2008 album Velocifero. It gives Mira Aroyo an opportunity to belt out a song in her native Bulgarian, her clipped vocal style sailing over buzzy synths and harsh percussion.

Jumping up to date, the next song to emerge is the smooth synths of ‘The Island’ which is one of the new tunes from the forthcoming album. It’s a much breezier approach to electropop than the Ladytron of old, showing how the Liverpool outfit have evolved their sound.

It’s clear that Velocifero is definitely a well that Ladytron are drawing from lately as a lot of tonight’s songs are drawn from that album. A solid ‘Ghosts’ is rolled out along with an impressive ‘Runaway’, which has an electric quality to it enhanced by a powerful percussive foundation.

The second new tune from the forthcoming album features the driving beats of ‘The Animals’. It’s crafted from the more baroque synth outings of Ladytron of old and features a haunting vocal delivery by Marnie. During the performance, the band are often shrouded in darkness or painted with the screen projections (which revolve around odd abstract images and a falling figure). There’s little in the way of on-stage banter across tonight’s performance, although Marnie manages to show she’s enjoying herself once warmed up (“This is a fun Sunday”). Meanwhile, Aroyo takes on a serious demeanour behind her Korg MS-20 – a consistent workhorse synth for Ladytron since the 604 days (also a synth which apparently has some issues halfway through the gig).

‘Fighting in Built Up Areas’ is another opportunity for Aroyo to work out her own thing on stage. Its primitive beats and collage of sounds lending an electronic garage punk sensibility to the Witching Hour number.

Things take on a more polished aspect with ‘International Dateline’ which has always been one of the band’s understated gems. Marnie’s evocative vocals work their wonders on the song’s strangely engaging narrative and it emerges as one of the concert’s highlights.

Ladytron also dip briefly into 2011’s Gravity The Seducer album (see The Electricity Club’s review) for ‘White Elephant’. Here, the arctic melodies of the original are presented in a much more muscular outing. Then the set zips back to early Ladytron with the Moroder-esque rhythms of ‘Discotraxx’, which gets a huge cheer from the audience and managed to wraps things up neatly. The band return for encore duties with the superb robotic beats of ‘Seventeen’. Any stage nerves are by now dissipated as both Marnie and Aroyo break out into huge grins singing to each other for one of Ladytron’s tentpole numbers. Equally, an epic ‘Destroy Everything You Touch’ brings the concert to an end in an impressive manner.

With nearly 20 years of material to plough through, it’s perhaps tough to choose what songs to drop into the live set. That said, it’s a shame that songs such as ‘Playgirl’ didn’t get an airing for this performance. But it’s tough to fault the setlist that Ladytron have rolled out tonight. It’s also a reminder of how important they were during the early years of the electronic renaissance – and how important they remain as we look to the next decade of music.