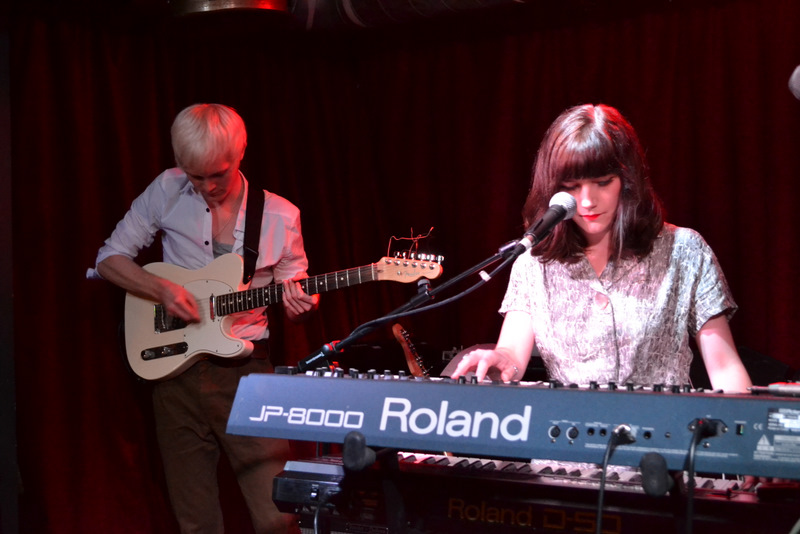 An Evening of Electropop Synthpop and electronic music website The Electricity Club (TEC) hosted their first ever live event at the weekend. Situated on New Oxford Street, The Bowery was the ideal venue for an extended night of English electropop. Featuring a team of TEC DJs and live performances from Curxes and Vile Electrodes, this was an essential event for anyone interested in new synth music.

TEC writer Steve Gray kicked off the night the with first DJ set, starting with some Human League and serendipitously playing a John Foxx mix just as the remixer himself (Paul Boddy aka EMP) walked in: it was that kind of night! Curxes Roberta and Macaulay settled their pre-gig nerves with a nice cup of English tea ­ the rider of choice for electro acts! As they took to the stage for their first ever London appearance, a hush descended amongst the crowd and expectations were high.

Curxes did not disappoint: with an air of Delia Derbyshire to her, Roberta Fidora looked liked she could not only play her synthesizers but rewire them too. Multi-instrumentalist Macaulay Hopwood seemed equally at home on guitar or keyboard, but it’s Roberta’s voice that most people commented on afterwards. Powerful, emotional, mesmerizing; the diminutive Ms. Fidora weaves around the music so majestically you sometimes miss just how good the songs are too. New track Lightness was the perfect Halloween warm-up, with its eerie build-up and electro-goth sound. Debut single ‘The Constructor’ was very well received, and the frantic electro post-punk of ‘Jaws’ ended their set perfectly. With a few more songs in their repertoire I could easily see Curxes headlining at much bigger venues.

Chi Ming Lai then took to the decks, treating us to an exclusive preview of the new Marsheaux remix of The Human League’s latest single along with other specially selected tracks such as Nikonn’s excellent remix of Lana Del Rey’s ‘Blue Jeans’. The Bowery was pretty packed by now, late arrivals making it down from the upstairs bar in time for the main act of the night. With the stage dressed in glowing red-eyed Halloween skulls, Vile Electrodes (minus one, since Loz Tronic was unfortunately not feeling too well) made their entrance to rapturous applause.

Opening with the downbeat ‘My Sanctuary’, the Viles duo slowly warmed us up before things really kicked off with The Leopard. Anais Neon looked and sounded stunning, she dominated the stage while Martin Swan worked his Vince Clarkean magic beside her. New song ‘Drowned Cities’ instantly hooked me, its Front 242 ‘Happiness’ vibe reminding me that Vile Electrodes aren’t just any other synth-pop band. A second new song called ‘Nothing’ followed before the highlight of the set for me: ‘Empire of Wolves’. This sounded even better than the version on Soundcloud, its deep and dirty throb expertly balanced by The Bowery’s sound man and leaving not just Anais Neon panting for breath by the end of it. The sublime ‘Deep Red’ bathed us all in a warm glow before encore song ‘Proximity’ (another one of my favourites) ended the show on a high.

The merchandise stall had a good selection of CDs on offer, including the beautifully designed 4-track EP from Curxes (each CD looking like a 5″ vinyl record and wrapped in unique music sheet paper) and the brand-new EP from Vile Electrodes, available in three different versions. Since this was the night before Halloween, Anais Neon had made 13 latex covered special editions and these were all snapped up within minutes (note for next year: make 666!) but those who missed out could buy a special version of the EP and have a Polaroid taken with the band. Special mention should go to talented compere Lady Becca and The Blitz Club’s Rusty Egan who’d come along especially to see Curxes. It’s fantastic that this type of music and this type of event can bring together fans of all ages and from all over the UK (I wasn’t the only one who’d travelled down from Scotland for this!).

In a little over a year The Electricity Club has built quite a reputation for itself, and this was evident by the excellent turn out (for a Sunday night) and general goodwill all round. It’s like a great big party with lots of friends, one guy told me, and I think he summed up the night perfectly.

Ways To An End – Mirrors

The Sweetness Of My Pain – Daybehavior

3AM – Kleerup with Marit Bergman

The Girl & The Robot – Royksopp

Looking From A Hilltop – Section 25

Shoot The Bullet – Queen Of Hearts

That’s Not Gay – OMD vs The Ting Tings

For Whom The Bell Tolls – Fad Gadget

Summerland – John Foxx and the Maths

A New Sky – The Presets

In Trance As Mission – Simple Minds

Here’s a complete Spotify playlist with (almost) all the songs played by the TEC DJ team, featuring classic and new synth-pop both well-loved and little-known:

This text of this article was originally published at www.pansentient.com and re-published with grateful thanks to Jer White

The Electricity Club would like to give its grateful thanks to Vile Electrodes, Curxes, TEC001’s team of helpers, Rusty Egan, The Bowery and all those who supported the event to make it a success.