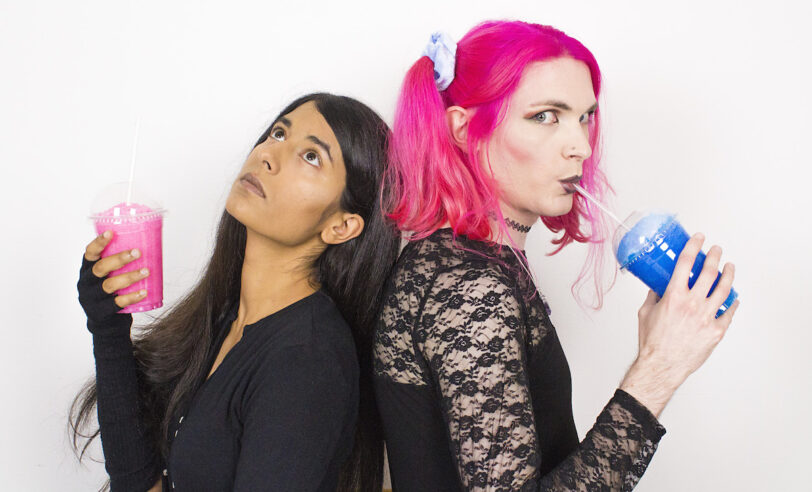 The south coast seems to have been a healthy area for spawning electronic outfits in recent years (presumably, the sea air provides a crucial component). One of the most recent combos to emerge is Powderpaint, a Brighton-based duo who sum up their music as “Outdated. Timeless. Retro. Eternal.”

Consisting of pop producer Hazel (Envelope Generator) and songwriter/vocalist Shonalika, Powderpaint have just released their debut EP. The eponymously-titled release featured six tracks that have percolated from the duo’s diverse range of influences. With a heavy lean-in to 80s disco and Hi-NRG, Powderpaint also count the likes of Scritti Politti, The Pointer Sisters, Pet Shop Boys, a-ha and Florence + The Machine among their inspirations.

Drawing influences from classic electronic music history can be a tricky endeavour. It’s all too easy to emerge as a pastiche of a particular genre or period, which can often ironically undermine the actual music. In the case of Powderpaint, they’re an electronic duo that certainly wear their influences on their sleeve. However, there’s also an ear for arrangement and melody preventing these tunes from being simply xeroxed versions of classic genre songs.

Prior to their Powderpaint endeavours, the pair already had their own separate dabbling in the world of electronic music. As a solo affair, Hazel original struck out under the moniker Envelope Generator. That project offered up original compositions such as ‘Emasculine’, which demonstrated an intriguing synth wave/synth-pop quality matched with a talent for production. But it was also a journey that featured covers of the likes of YMO and Kraftwerk (while also getting handy with the likes of the ARP Axxe and Moog Prodigy).

Meanwhile, Shonalika has demonstrated their vocal talents on covers of artists such as Marina and ChiLLa, as well as providing cultural commentary via their dedicated YouTube channel.

As part of their journey together as Powderpaint, they’ve given Childish Gambino’s ‘Redbone’ a stylish synth-pop flourish, delivered strident pop care of tunes like ‘This Being’ and lush soundscapes elsewhere, such as the emotive ‘For Parts’.

With the release of the Powderpaint EP, the duo describe their debut’s themes as covering “trans identity, bad relationships, pseudoscience, and an unapologetic celebration of queer people’s love and happiness.”

Take ‘Fall Together’ as an example, a composition that oozes synth polish with a funk foundation. It’s a love letter to disco pop, which even boasts a brass interlude and 80s drum fills. At its heart, the song’s message is “Don’t give up on your dreams” delivered via a bright, ecstatic slice of synth-pop.

‘Fighting To Lose’ is a more airy outing which also offers up a bass groove as well as a smidgen of synthwave. Elsewhere, ‘Constellation’ has a lounge pop sensibility with some sweet layered synths. Meanwhile, the excellent ‘For A Moment’ throws a nod to Pet Shop Boys with its piano melodies and use of orchestra stab samples (there’s even a spoken word breakdown). It’s a bittersweet love song with some effective lyrical couplets (“I never could contend/We were destined to end”) given a warm foundation with its synth flourishes.

‘Ego’ offers up one of the best moments on the EP and shows Powderpaint at their strengths. With its brash pop arrangements and pithy lyrics (“You lean on controversy/Dream up an enemy”) it’s an uplifting outing that demonstrates the duo can go big.

Things close out with a cover version of Florence + The Machine’s ‘Spectrum’. This number is a euphoric pop anthem that revolves around the chorus “We are shining/And we will never be afraid again” and serves as a rallying call that’s a fine moment to end things on.

Powderpaint’s approach to promo videos is also intriguing. Whereas other artists strive to craft visually dynamic productions, their videos (for the most part) opt for a much more languid approach. It’s a clever concept and seems to offer up a commentary of its own on YouTube culture.

There’s also a strong visual theme in the design concepts Powderpaint employs which is specifically designed to capture that 80s synth-pop aesthetic. That includes the EP’s striking illustrated sleeve that shows off the talents of artist aliceincaves.

As a live outfit, Powderpaint have also seen a rapid arc in their successes. Since their live debut at Brighton’s anarchist co-operative The Cowley Club in 2018, the duo went on to play Brighton Trans Pride that same year. They were then invited back to headline the event in 2019. Obviously, the current Covid crisis has sadly put a halt to their live outings for now. However, they have their hopes set for 2021 with an album mooted for release that year.

For those that have a particular love for that groove pop approach that put its mark on 80s electronic music, there’s a lot to appreciate here. At the same time, Powderpaint come across as very much their own thing with some considerable musical talents. The Powderpaint EP is out now.