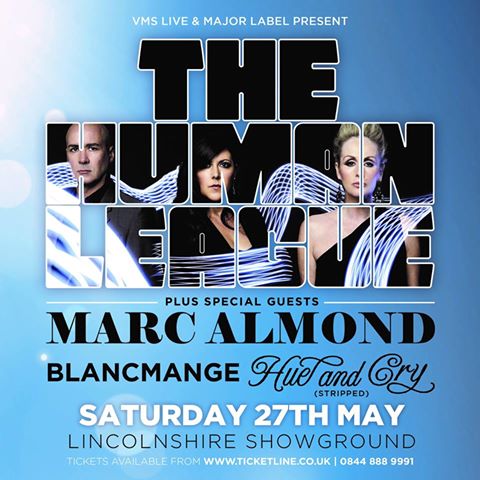 THE HUMAN LEAGUE are one of the UK's most successful synthpop acts. Originally formed in Sheffield in 1977, the band came to attention on the back of their 1978 single

THE HUMAN LEAGUE are one of the UK's most successful synthpop acts. Originally formed in Sheffield in 1977, the band came to attention on the back of their 1978 single 'Being Boiled'. They later achieved commercial success after signing with Virgin Records in 1979, particularly on the back of third album Dare in 1981. The album featured four hit singles, including 'Love Action', 'Open Your Heart' and the UK/US number one hit 'Don't You Want Me'.

MARC ALMOND was part of the chart-topping synthpop outfit Soft Cell who recorded a string of classic songs, including 'Tainted Love', 'Say Hello, Wave Goodbye', 'Bedstitter' and 'Torch'. He went on to carve out his own successful solo career which included the successful 1988 album The Stars We Are. Almond drew acclaim for cover versions of songs such as 'Something's Gotten Hold of My Heart' (with Gene Pitney) and his interpretation of Jacques Brel’s 'Jacky'. A new compilation album, Hits And Pieces – The Best Of Marc Almond And Soft Cell is released in March.

BLANCMANGE achieved recognition as a synthpop duo consisting of Neil Arthur and Stephen Luscombe, originally via a track on the iconic Some Bizzare Album, but later through singles such as their 1982 double A-side single, 'God's Kitchen'/'I've Seen the Word'' and hit single Living on the Ceiling'. Their debut album, Happy Families became one of the most recognisable synthpop albums of the 1980s and they followed this up with chart success via singles 'Waves, 'Blind Vision' and 'Don't Tell Me'.